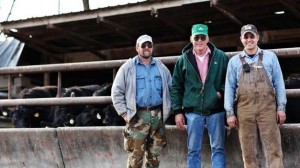 Five generations of the Tabb family have worked their farm in Jefferson County, WV

The program is scheduled to air Sun., Jan. 26, 2014, onNewsHour Weekend and will feature a five-year-old collaboration between Tabb & Sons and the food service operations at the Department of Veterans Affairs (VA) Medical Center in Martinsburg. After airing, the segment may also be viewed online at http://www.pbs.org/newshour/topic/weekend/. Please note that the segment may be postponed without notice.

Since 2009, Tabb & Sons has turned kitchen food scraps and cafeteria leftovers from the VA into “black gold” at their Kearnesyville farm, saving hundreds of pounds of food waste from the landfill each week. The waste-reduction collaboration begins at the VA’s nutrition and food service department in Martinsburg, which is headed by nutritionist Barbara Hartman. The staff places food scraps into biodegradable bags which are then placed in recycled boxes and stored in a freezer. Every two weeks the food waste is picked up and taken to the Tabb farm to be composted.

“Our relationship with the VA has enabled us to realize another level of recycling that we did not think possible,” said Cam Tabb, whose farm began large-scale recycling in the early 1990s. “I hope our story will educate others about creative ways to recycle and reduce landfill deposits of food waste, which is what we are all working for.”

This collaboration has become one of the federal government’s most successful food waste reduction programs according to Biocycle magazine. Other VA hospitals around the nation have replicated this model developed in the Eastern Panhandle of West Virginia.

According to the USDA and the Natural Resources Defense Council, 40 percent of food produced in the United States is not eaten. This translates into $165 billion worth of food annually.

The PBS story will show footage of the VA’s food service operations as well as scenes of Cam Tabb taking food scraps from the hospital and putting them into the compost windrow at the Kearnesyville farm.

The Tabb family farm is now in its fifth generation. Farm operations include grain crops, a 500-head Angus beef herd that is antibiotic and hormone free, and large-scale recycling of food scraps, yard trimmings, manure and wood wastes.

“As we have become involved with recycling programs on our farm, we have made it a priority to create a profit margin while maintaining the integrity of recycling wastes and adding value to them,” said Tabb. “By making our recycling enterprise sustainable, the potential for expansion is endless, versus programs that depend on outside funding.”