Plans for a multi-use horse park and agricultural center in Jefferson County are moving forward now that funding for an in-depth feasibility study has been obtained.For the past four years, a small group of people interested in equestrian sport, agriculture, land preservation, and economic development in Jefferson County have been working on a vision for the Shenandoah Horse Park and Agricultural Center (SHPAC). The plan is to provide a multi-use equine, equestrian, and agricultural facility in Jefferson County that would serve the county and mid-Atlantic region and support tourism, local and state economic development, recreation, and environmental education opportunities. A preliminary study showed interest for a local horse park, but presently, such a facility is not available within a 100-mile radius of the area.

The SHPAC board, which includes Meredith Wait, Nigel Casserley, Georgiana Pardo, Annette Gavin Bates, Kate Byron, Rod Snyder, and Neal Barkus, had been seeking funds from private individuals and organizations for an in-depth feasibility study. In June, the group reached its goal after receiving a U.S. Department of Agriculture (USDA) grant to help fund the assessment. The in-depth feasibility study will include assessments on market demand, financial feasibility, economic impact, and possible locations for the horse park and agricultural center.

In 2016, the Jefferson County Development Authority (JCDA) pledged $2,500 toward the feasibility study 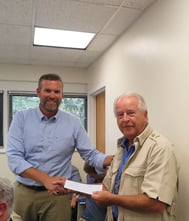 and honored its commitment at its August 2018 meeting. "The JCDA is pleased to learn that funding has been obtained and the feasibility study is now underway," said Nicolas Diehl, executive director of the JCDA. "The study will assess the potential economic impact that such a facility could have on tourism and agriculture growth in Jefferson County."

More information about plans for the Shenandoah Horse Park and Agricultural Center is available at www.shenandoahhorsepark.com